“JSIC” (Janyaa Social Innovation Challenge) is an annual event held for students where Janyaa’s JLIB (Janyaa Lab In a Box) program is implemented. Students from Class 6 to Class 10 of different Government Schools plan, devise, execute and display working scientific models that benefit the communities they live in.

This year, JSIC was held on 28th February at Abids, Hyderabad for the government schools Janyaa partnered with United Way & Qualcomm. The theme was “Renewable Energy & Waste Management”. My son Anurag and I had the opportunity to visit this year’s JSIC.

At the event, it was a pleasure meeting Janyaa Team members – Surendra, Satish and Natarajan. Despite the rush of events around us, we had a good interaction with Mrs. Chitra Jayanti, Executive Director of Janyaa. All Janyaa team members were busy helping children with their exhibits, coordinating among teachers, recording the events and generally helping organize the event. Surendra was also one of the members among the Judges Panel. 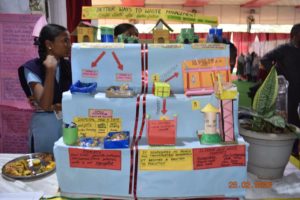 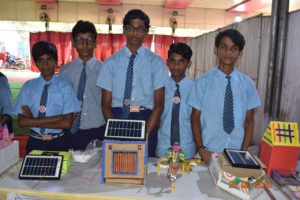 We moved around among the students and their different exhibits. The enthusiasm with which the students would invite us to their tables and explain the concept behind their working models was an enriching experience. Another striking feature at the Fair was the large number of girls participating in the Fair. There was one particular model wherein girls of Government School, Sultan Bazar displayed a practical model for utilization of dry and wet waste collected from residences and industries. The dry waste was to be recycled for further processing as raw materials and the wet waste was to be used for power generation.

The Chief Guest of the event, Mrs.B Venkata Narsamma, the District Education Officer was taken around and shown the various exhibits. She distributed the Prizes in various categories to the beaming children and their proud teachers. It was a very enjoyable experience to be a part of an event wherein students from Government Schools displayed their knowledge and talent by conceptualizing, displaying and explaining their beautiful models. We are sure that this opportunity would go a long way in inculcating the requisite scientific temper among the needy students and would further lead them towards achieving their desired careers in future.